Map of Cookamidgera in relation to other locations. Source: Google Maps

Travelling to Parkes on the “Orange Road” (technically Henry Parkes Way) there is a little village on the left, Cookamidgera. While its heyday has come and gone, it still holds a special place in the memories of those who lived there or went to past events there. There are still loyal residents in Cookamidgera although its population has dwindled over the past few decades.

When the predecessor to the Australian Bureau of Statistics (ABS) – Commonwealth Bureau of Census and Statistics – undertook the census, Cookamidgera was recorded in 1947, 1954 and 1961. By the time of the 1966 Census, the CBCS had changed their way of recording results – only locations with a minimum of twenty dwellings (occupied and unoccupied) and one hundred persons would be recorded. This change meant that Cookamidgera, along with many villages and small towns, disappeared with their residents recorded on larger towns such as Bogan Gate, Parkes, Peak Hill, Trundle and Tullamore (in future Census recordings Bogan Gate would disappear with its residents recorded under Parkes). According to ABS, in the 2016 Census Cookamidgera had a population of 164 (Source: Australian Bureau of Statistics website)

The Census results for Cookamidgera when it was calculated separately. Chart made with Online Chart Tool. Source: Australian Bureau of Statistics

Click here to read about The Rise, Fall & Rise of the Population of the Parkes Shire

The railway station at Cookamidgera was originally called Bindegandri when it opened on December 18, 1893. The station was renamed Cookamidgera on August 29, 1895 and was formally closed on January 20, 1975 (Source: NSWRail.net website). There is only one mention of Bindegandri, on Trove with Daily Commercial News and Shipping List Wednesday 5 December 1894 mentioning a shipment of wool. Bert McKay records in his book, Cookamidgera Memories, that in the early days Cookamidgera was called Flagstone. The late local historian, Len Unger, concurs that Cookamidgera was called Flagstone after Flagstone Creek that was situated close by. There is a mention of a purchase of 100 acres by Joseph Collits at Flagstone Creek in The Riverine Grazier dated Wednesday August 22, 1877, page 2. Today, Flagstone Street is one of the streets in Cookamidgera.

The first building erected in the village of Cookamidgera was the School, built of slab walls with a bark roof. The floor boards were cut with a pit saw. The teacher was a Mr Bryant who taught at Reedy Creek one week and Cookamidgera the next. There were only seven pupils. He came one Monday morning, rang the old bullock bell and marched us in. The first thing that took our eyes was a possum asleep up under the ridge capping. Teacher warned us and promised a hiding to anyone he saw gazing at the animal, but I took one look too many. He sent a boy out to cut a green stick and didn’t he lay it on!

The first mention of Cookamidgera in any Australian newspaper occurs in 1879. Australian Town and Country reports that William Chapman purchased 40 acres in Cookamidgera. With Cookamidgera straddling the border of Parkes and Forbes, its association has flitted between the two shires. When cadastral maps were utilised, Cookamidgera was a parish in the county of Ashburnham. Today, Cookamidgera is part of the Parkes Shire LGA. However it has occasionally been linked with Forbes Shire also. 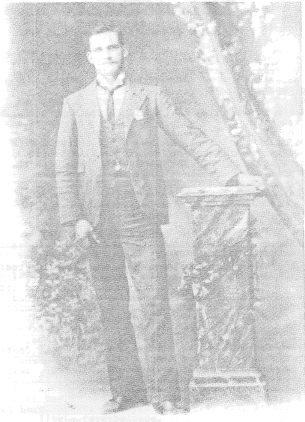 Two Germans, named Braulic and Klotz, were the first to form a sheep station. Their headquarters were a little place just where Vic Hawken’s farm is now. They and my grandfather [James Thompson] became great friends. One very dry year they were very short of water and Braulic arranged with my Grandfather to water 1,600 sheep at his well. He would bring them over in lots of about 400 at a time, which meant four trips a day, and would shake hands with him each time and say, “Vell Shimmie, ‘Ow are yer now?'” They used to ride into Parkes about once a week on horseback, on behind the other, sometimes a fair distance between. On the way out from Parkes, very close to the track leading down to the Billabong from the main road, was an old caved-in digger’s shaft. Coming home from town one dark night, Braulic out in front, not hearing any word from Klotz, rode back and found him, horse and all, down the hole. It was not very deep, but the horse couldn’t get out and Klotz was afraid to get off for fear of being trampled under the horse, so decided to stay on top while Braulic went back to town to get help. He wasn’t away long before he was back with some men with picks and shovels. They dug a sloping trench back towards the shaft and the horse floundered out with Klotz clinging round his neck. They arrived home safely. Braulic told my Grandfather all about the experience they had and said, “I could not make out where ze ____ my partner had got to.” Braulic and Klotz later sold to Mr Edward Webster.

Map of Ashburnham County, highlighting the parish of Cookamidgera in 1881. Source: County & Parish Maps of NSW With Index by Alice Jansen (1991) page 9

Click here to read about the county of Ashburnham 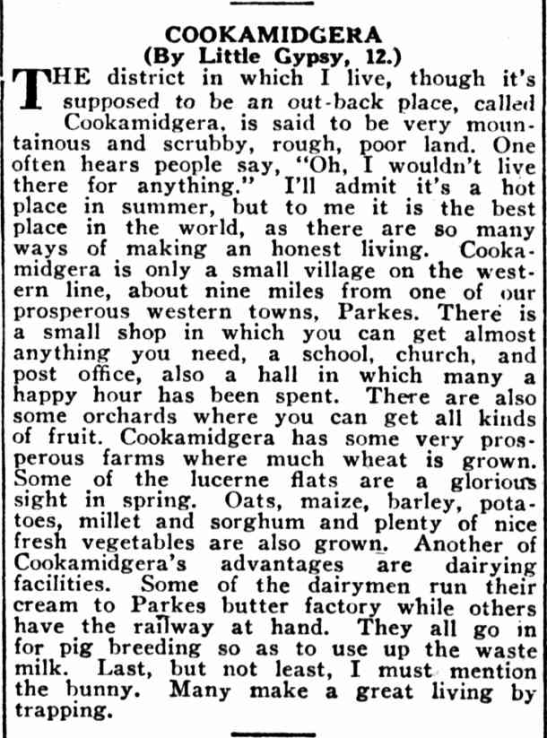 A child’s perspective of life in Cookamidgera. This report highlights highs and lows of living in a country village during the Great Depression years. Source: The Land Friday September 9, 1932 p.16

As part of the Central West, many would associate Cookamidgera with hot temperatures. While this is true in late spring and summer, the winters can be quite cold too. However there was an unusual report of snow falling in the Parkes region in spring! The Western Champion reported snow falling between Manildra and Cookamidgera to a depth of four inches on Tuesday night of September 5, 1905. (Source: Western Champion Friday 8 September 1905, page 8)

Click here to read about Snow in Parkes Shire

A photograph of Roy Hawken carting the charcoal to the Parkes flour mill on his Model T Ford truck, near Cookamidgera. Source: Model T Ford Forum 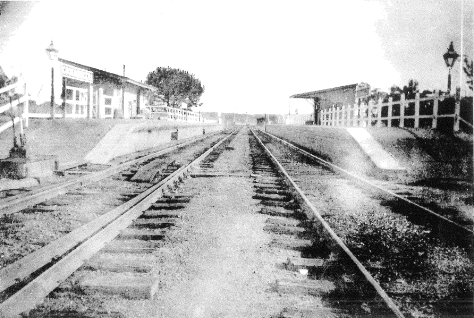 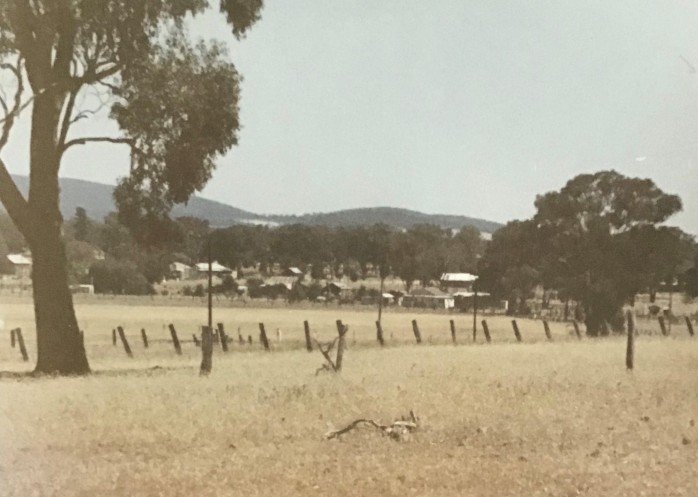 As country towns and villages disappear, so too do the characters that make these places unique. Thankfully National Film and Sound Archives Australia (NFSA) has recorded Cookamidgera local, Colin Charlton, playing some of the music he grew up with.

The Man from Cookamidgera: Songs and Music of Colin Charleton is a video recording collected by National Film and Sound Archive of Australia (NFSA) where John Meredith took a visual and oral recording for posterity. Source: YouTube

*** PLEASE NOTE *** This video recording spells the surname with an added ‘e’. The correct spelling according to the family is CHARLTON.

Like all country areas, Cookamidgera is susceptible to bushfires. A significant bush fire broke out on the first Saturday of 2014. While two homes were destroyed and a third suffered minor damage, if not for the quick response by the Rural Fire Service the damage could have been far worse.

If you go to the Elvis Festival by train, you will pass through Cookamidgera! Ethan Jones took this wonderful panoramic photograph of the Elvis Express as it approaches the Cookamidgera Level Crossing. Source: RailPictures.Net

HAVE WE MISSED SOMETHING??? If you have stories, photographs or memories that you are willing to share about Cookamidgera please contact Parkes Shire Library via dan.fredericks@parkes.nsw.gov.au so that they can be shared and kept for posterity on this blog. Alternatively you may leave comments on this page.