1945 in Parkes – images of the Australian half penny and a 1945 John Deere B tractor. Sources: Half penny from TDK Australian Pre-Decimal Coins website and John Deere tractor from Mid-states Antique Tractor Show website

This post will look at something different in comparison to previous HistoryParkes entries. Newspapers from the past provide a valuable insight into the attitudes, priorities and challenges from yesteryear. Spanish-born American philosopher, George Santayana, wrote that:

Those who cannot remember the past are condemned to repeat it.

These words were borrowed from by British wartime Prime Minister, Winston Churchill. With those sentiments in mind, we highlight a time when Parkes residents would have been more familiar with Sir Winston Churchill – the summer of 1945.

Modern local newspapers, Parkes Champion Post and Parkes Phoenix, continue to provide a valuable service to the Parkes Shire and beyond. It is difficult to imagine just how important the newspaper was to Parkes Shire residents well before television, the Internet and mobile phones. Travel back in time via microfilm to view some of the reading being done in 1945. World War 2 is still raging, many residents are overseas contributing to the war effort and the only source of regular information is the newspaper. The Champion Post (the previous name for Parkes Champion Post) contained news, articles and advertising – all of which looks very different to contemporary readers!

The beginning of 1945 didn’t bring good news – 1944 was the driest year since 1890! Most of New South Wales was in the worst drought since 1902, all while many men and women were overseas taking part in the Second World War!

Not only did Parkes shire have to deal with the Second World War in its sixth year, but also 1944 was the worst dry year since 1890. Source: The Champion Post Thursday January 4, 1945 page 1

Part of a front page advertisement for Howard’s Department stores. at the time with several locations in the Central West. By comparison to advertising and marketing today, this Howard’s advertisement would be considered “quaint”. However the aim was still to entice customers into their store to make purchases. With competition from other local department stores – such as Burch’s and McGlynn’s – good advertising could help one store get more of an edge over the others. Source: The Champion Post Thursday January 4, 1945 page 1 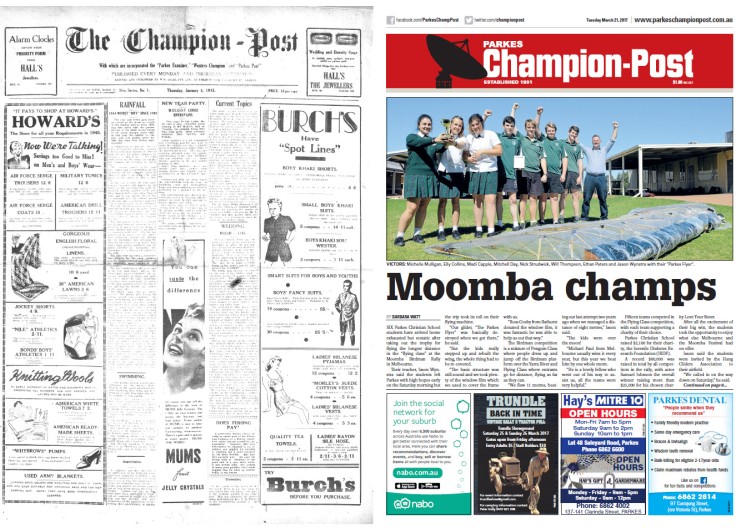 Front page comparison – 1945 and 2017! The name may have changed but this is the same newspaper, 72 years ago and today. Newer technology has allowed for colour print, different fonts and even colour photographs for the 2017 version. 1945’s front page packs more words in, partly due to a smaller type size and all images are drawn, not photographs. Source: The Champion Post Thursday January 4, 1945 and Parkes Champion Post Tuesday March 21, 2017

Less than two months ago The Champion Post was reporting the driest year since 1890. The following article details the huge amount of rain in approximately 30 minutes. According to the Bureau of Meteorology website, 1 point = 0.254mm – meaning that Parkes endured 48mm of rain. Radio station 2PK was surrounded by water, and home in Currajong Street were flooded.

Excerpt from an article detailing the sudden and enormous amount of rainfall in Parkes. In about half an hour, Parkes received 137 points or 48mm of rain! Source: The Champion Post Monday February 26, 1945 page 1

This data below, taken from the Bureau of Meteorology website, explains how to convert points to millimetres and vice versa. Farmers usually divide the number of points by 4 to give them the approximate answer in millimetres.

When did Australia change from points to millimetres for measuring rainfall?

In January 1974 the Bureau of Meteorology made the conversion from recording rainfall and evaporation in points to millimetres (1 point = 0.254 mm, and 1 mm = 3.94 points).

Having a look at some of the advertisements from 1945 newspapers, it is evident that this is a time vastly different from the one we know today.

Using powerful images of Second World War, such as the R.A.A.F, could assist with convincing customers to part with their hard-earned cash. Stamina Trousers, made from Crusader Cloth, hoped to align its product with the positive imagery of the flying aces of the time. Source: The Champion Post Thursday January 4, 1945 page 3

Modern thinking is to always align your product with positive thoughts and experiences – ignore mentioning anything negative at your commercial peril! In 1945 Uncle Toby’s Oats advertised when it was impossible to purchase their product – and then mentioned the severe drought as well! Customers were advised to “Keep in touch with your grocer”. Two columns to the left, proof that the drought was not some 1940s advertising technique. Australia produced the lowest wheat crop since 1919-20 (just after the First World War). Source: The Champion Post Thursday January 4, 1945 page 7 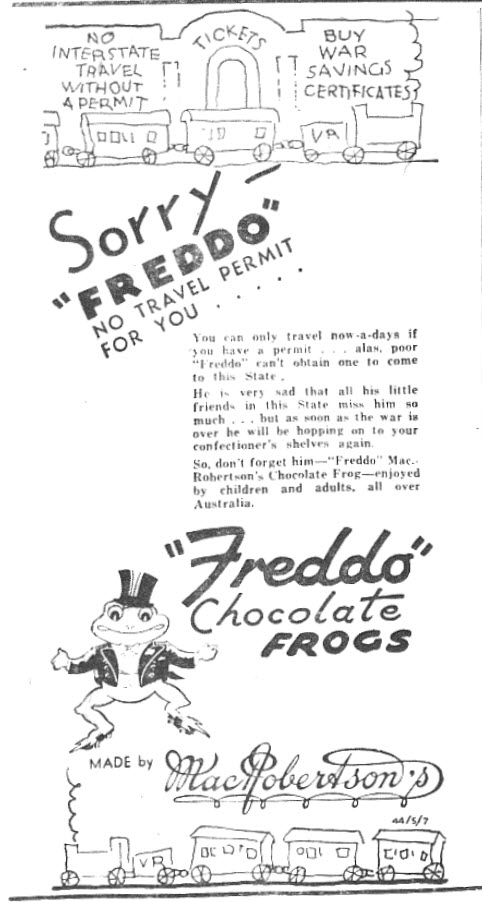 Today stores have an abundance of confectionery for children (and adults!) to purchase. In 1945 children were deprived of one of the few sweets available, in New South Wales at least, due to the ban on interstate travel (this was an effort to save fuel for the war effort). The chocolate treat, Freddo Frogs, were invented in Australia in 1930 by 18 year old MacRobertson’s employee Harry Melbourne. Australian-owned MacRobertson’s was bought by British company Cadbury in 1967. Advertisement source: The Champion Post Thursday January 11, 1945 page 3. Information source: Sydney Morning Herald January 29, 2007 and Cadbury website 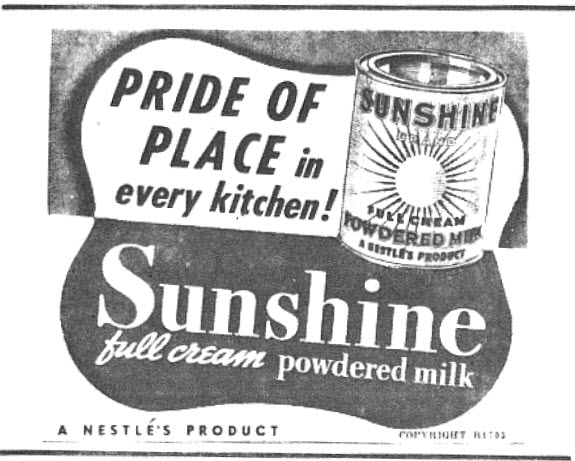 Recently the dairy industry and supermarkets have been in the news due to reports of a supposed “milk war”. During wartime, people needed powdered milk to use in cooking, breakfast cereal and in their hot drinks. Produced by Nestlés (which would have been pronounced by the general public as ‘nestles’ rather than today’s ‘nes-lay’) this provided families with their dairy intake as was still advertised on television in 1960s. Advertisement source: The Champion Post Thursday January 18, 1945 page 6. Information source: Australian food history timeline website

At first glance this appears to be an article in the newspaper, however it is actually an advertisement for Charmosan face powder. One of a number of different themed advertisements, this was a subtle attempt to disguise advertising as real news, thus giving the product an air of authenticity. Source: The Champion Post Thursday January 25, 1945 page 5 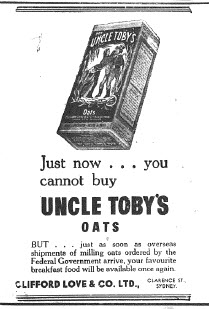 Another advertisement for Uncle Toby’s Oats, although production and delivery is almost upon the consumer this time, thanks to Federal Government intervention. Source: The Champion Post Thursday February 15, 1945 page 3

Compared to contemporary print advertisements, the 1945 versions were loaded with information and quite “wordy”. Note also that this advertisement includes manager and employee details. Source: The Champion Post Thursday February 15, 1945 page 3

Advertising for democracy and citizenship! This advertisement is on behalf of the Australian Constitutional League and encourages each voter to join and be active in whatever political party they vote for. It is also loaded with emotive statements, railing against political apathy. Source: The Champion Post Thursday February 15, 1945 page 6

Another victim of the wartime interstate travel ban, MacRobertson’s Cherry Ripe advises customers that it will be distributed again “…as soon as possible.” Source: The Champion Post Thursday February 22, 1945 page 6

The Parkes Shire has an amazing history – full of interesting stories and amazing people. They are published here for you to read and share. The microfilm collection is one of the many resources in Parkes Library’s Family & Local History room. Whether a Parkes Library member or not, everyone is welcome to utilise these invaluable resources.