Many historical and significant people can be found by reading the street names of the Parkes Shire. Road names such as ‘Church Street’ and ‘Railway Sreet’ indicate close proximity to important town fixtures. Most residents would be aware that ‘Clarinda Street’ was named after Sir Henry Parkes’ first wife, Lady Clarinda (née Varney) in 1887. The original name of Clarinda Street was ‘Forbes Street’, highlighting that roads can be renamed. However the street name historyparkes will focus on today isn’t named after a local resident. Captain Wilson Avenue is a short road that connects Close Street and Middleton Street. It originally was intended to be called ‘Canberra Street’ – with side streets being named Melbourne Street and Sydney Street. This post will look at who Captain Wilson was and why he was chosen to be honoured with a street named after him.

Map of section of Parkes, highlighting Captain Wilson Avenue. The thick yellow line to the right is the Newell Highway (aka Bogan Road). Source: Google Maps

Gordon Campbell Wilson was born on October 6, 1895 at Minmi, an outer western suburb of Newcastle, New South Wales. His parents were Scottish miner, William Wilson, and Tasmanian-born Agnes Cecilia (née Jackson). A student of public schools he then went on to Newcastle Technical College before becoming an apprentice patternmaker with the engineering firm A. Goninan & Co, Ltd. (Fraser 1990 from the Australian Dictionary of Biography website)

Photograph of Gordon Campbell Wilson, part of the Australian Flying Corps. Before this he also was a sapper. Source: Aussie Sappers website

Historian Alan Fraser details Wilson’s bravery and determination to serve his country during the Great War:

At the outbreak of World War I Wilson was a member of the 39th Fortress Company, Engineers, Australian Military Forces, and soon after transferred to the Australian Imperial Force. He embarked from Sydney as a lance corporal with the 1st Field Company, Engineers, in October. After training in Egypt, his unit was among the first to land at Gallipoli on 25 April 1915 and Wilson’s work in trench consolidation during that day’s desperate fighting came under special notice. Although wounded during the first month, he remained on duty, distinguishing himself in mining and trench construction, until relieved in November. He was mentioned in dispatches and later awarded the Distinguished Conduct Medal for his Gallipoli service and for his work as a section sergeant of the 5th Division, Engineers, particularly during the battle of Fromelles, France, in July 1916.

Captain G. C. Wilson MC DCM, near Baizieux, seated in an D.H.5 A9449, ‘1’ aircraft with which he did effective bombing and harassing work during the Cambrai Battle of November 1917, thereby earning for himself the Military Cross. Standing near the propeller is 2348 1st Air Mechanic Henry Alexander Momsen. The white band round the fuselage was, at the time the photograph was taken, the official Squadron marking. Source: Australian War Memorial website

While experiencing war at both Gallipoli and in France would be more than enough for most soldiers, Wilson had not finished contributing to the war effort just yet. The amazing feats and accolades for this inspirational man continued:

Transferring to the Australian Flying Corps in December, Wilson was commissioned as a second lieutenant, A.F.C., in April 1917 and graduated as a pilot. In June he joined No.68 Squadron (later designated the 2nd Squadron) A.F.C., and flew De Havilland 5 aircraft. With other pilots of the three new A.F.C. squadrons soon to mobilize for overseas service, he was detached to a Royal Flying Corps squadron in France to gain practical experience in war flying. Wilson joined No.32 Squadron, R.F.C., in late July, but was wounded while carrying out low-level strafing during the 3rd battle of Ypres, Belgium. Rejoining his squadron in England, he was appointed flight commander, promoted captain and accompanied the squadron to France in September. Equipped with aeroplanes inferior in performance and armament to enemy fighters, the squadron received special training in ground attack and played an important part—though with heavy casualties—in the battle of Cambrai in November: no fewer than six squadron pilots, among them Wilson, were awarded the Military Cross on the same day for their difficult and dangerous low-level bombing and strafing in support of ground operations. Clashes with the Germans were frequent and Wilson was credited with the destruction of one enemy aircraft which he shot down and then blew to pieces with a bomb. 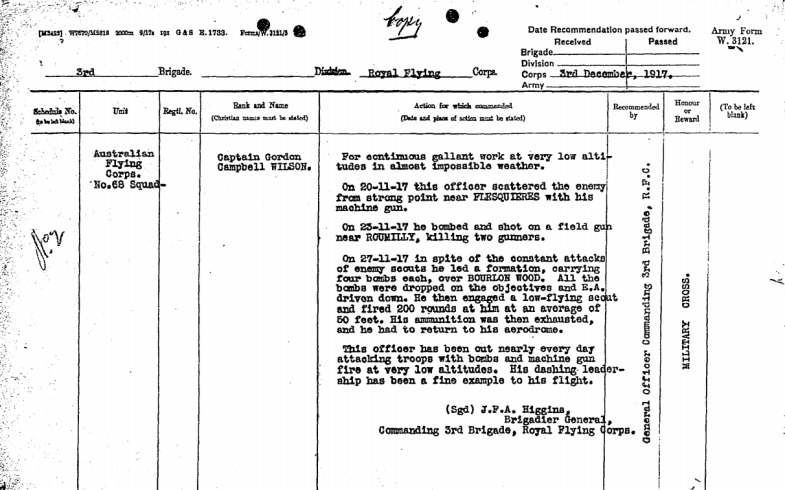 Captain Wilson’s recommendation for a Military Cross, highlighting his gallantry and skill as a pilot for the Australian Flying Corps. Source: Australian War Memorial website

According  to information found on the Australian War Memorial website, Captain Wilson is held in the highest esteem amongst British and  Commonwealth war heroes.

Of the many decorated members of the Australian Flying Corps only one , Capt G.C. Wilson had the the great distinction of having been awarded the Military Cross, Air Force Cross, Distinguished Conduct Medal, and Mentioned in Despatches. The combination of decorations is unique to an Australian and is not known to any other member of the British or Commmonwealth Forces. 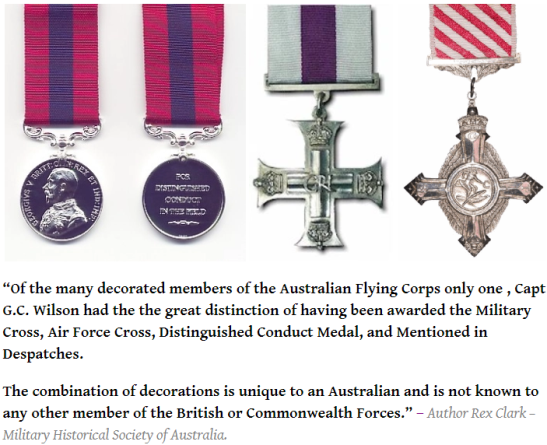 Captain Wilson was highly decorated, the only member of the British or Commonwealth Forces to have the great distinction of being awarded the Military Cross, Air Force Cross, Distinguished Conduct Medal, and Mentioned in Despatches. Source: Aussie Sappers website

After serving his country with distinction, Captain Wilson returned to civilian life still working in aviation. However the lack of government support meant “…many of the post-war aviation ventures failed…” even with Wilson’s association with Charles Ulm

Although his appointment with the Australian Imperial Force had finished in July, in September 1919 Wilson flew and landed in Parkes. He and his flying companion, Percy McNamara, were raising funds for the Peace Loan. This was an apolitical appeal project to support soldiers who were returning to civilian life. Those who were maimed were to be retrained in order to find a new occupation. Men in good health were to be assisted in receiving the benefits that they would have received had war not interrupted their careers. According to local newspaper reports, the Central West had been touched by Captain Wilson’s words as much as his flying expertise. Wilson’s flying tour had raised the following amounts: 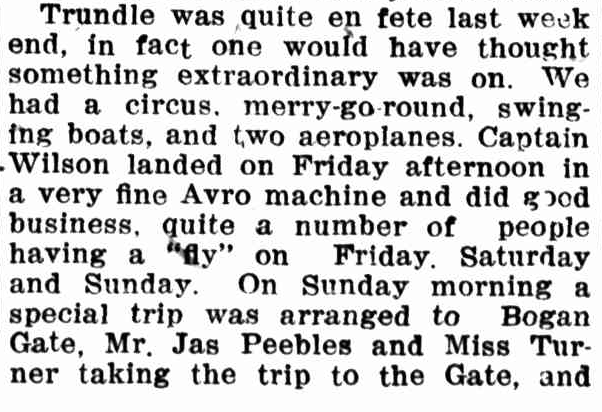 Tragically, Captain Wilson was killed while travelling through Bogan Gate. He was under employment of New South Wales Airways Ltd. Wilson’s two travelling companions – driver Mr M A Taylor and Mr N Bloomfield survived the accident with minimal injuries – Taylor had a broken wrist but was spared more serious injuries due the car being fitted with a flexible wheel. Bloomfield, sitting in the middle, only received a few scratches. All three were sitting in the front seat. It is believed that at the time of his death, Captain Wilson was engaged to be married. Captain Wilson had returned to Parkes, staying for about a week and renewing the town’s relationship with the heroic soldier. He was popular when recognised and as a result of his work aircraft rose in popularity among the general public.

The local newspaper mentioned that Parkes wanted to honour Captain Wilson by naming one of the streets in a new sub-division ‘Captain Wilson Avenue’. Source: Western Champion Monday 15 April, 1929 p.12

Captain Wilson’s death had a profound effect on the people of Parkes. He was given semi-military honours through the town, eight returned soldiers acted as pallbearers, with all traffic The Town Band marched ahead of the hearse, along with 40 ex-servicemen, the Mayor, Town Clerk and other dignitaries. Source: The Wingham Chronicle and Manning River Observer Friday May 24, 1929 p.2

Parkes Shire Library would like to thank the following people and organisations for their assistance with this blog post:

If you have stories or memories that you are willing to share about Captain Gordon Campbell Wilson and/or Captain Wilson Avenue please contact Parkes Shire Library via dan.fredericks@parkes.nsw.gov.au so that they can be shared and kept for posterity on this blog. Alternatively you may leave comments on this page.