Henry Parkes: the man and his impact

Parkes had a humble upbringing that didn’t suggest the far-reaching impact he would have on a country on the other side of the world to his birthplace.

Sir Henry Parkes (1815-1896), politician and journalist, was born on 27 May 1815 in Warwickshire, England, youngest of the seven children of Thomas Parkes, tenant farmer on Stoneleigh Abbey Estate, and his wife Martha, née Faulconbridge. Forced off their farm in 1823 by debt, the Parkes family moved to Glamorganshire and about 1825 settled in Birmingham, where Thomas was a gardener and odd-job man. Henry’s formal education was in his own words, ‘very limited and imperfect’; he briefly attended Stoneleigh parish school and later joined the Birmingham Mechanics’ Institute. Obliged as a boy to help in supporting the family, he worked as a road labourer and in a brickpit and rope-walk, before being apprenticed to John Holding, bone and ivory turner of Moseley Street. Having served his articles, he began his own business in 1837. On 11 July 1836 at Edgbaston Parish Church he had married Clarinda, 23-year-old daughter of John Varney, butcher. They regularly attended Carr’s Lane Independent Chapel under the formidable John Angell James, whose precepts and oratorical style left a permanent impress on Parkes. (Martin, A. W. “Parkes, Sir Henry (1815–96)”. Australian Dictionary of Biography. Australian National University)

Photograph of a young Henry Parkes. From the collection of the State Library of New South Wales [PXA 345, 19a] (Mitchell Library) as found on the Dictionary of Sydney website

The legacy of Sir Henry Parkes was across a wide range of social reforms that still benefit us today. Parkes was a “…politician extraordinaire, he rose to become Premier of New South Wales five times and was the man responsible for bringing forward the bill of Parliament that created Centennial Park.” (on Centennialparklands.com.au,. (2015). A word on Sir Henry Parkes – Centennial Parklands. Retrieved 11 December 2015, from http://www.centennialparklands.com.au/about/history_and_heritage/history_of_the_parklands/sir_henry_parkes)

In addition to the vision (and realisation) of a free public park for all people, Parkes also envisioned a much improved healthcare system. Henry Parkes

“… had a clear vision of social reform, public education and public healthcare, and he also held a strong commitment to women having public roles. In 1866 he wrote to Florence Nightingale about his requirement for Nightingale-trained nurses in the colony”  Judith Godden referenced by Dr Georgina Willetts  HENRY PARKES ORATION 2015: Dr Georgina Willetts www.parkesfoundation.org.au

Florence Nightingale received a request from Henry Parkes on behalf of the New South Wales Government. Parkes’s request was for a team of nurses to be sent to the colony to introduce Florence Nightingale’s style of nursing at the Sydney Infirmary and Dispensary and also to train nurses in Nightingale’s methods for hospitals throughout the colony. Eoas.info,. (2015). Osburn, Lucy – Biographical entry – Encyclopedia of Australian Science. Retrieved 11 December 2015, from http://www.eoas.info/biogs/P004670b.htm

The immediate impact once Lucy Osburn and her team of nurses arrived changed the methodology and attitude within the colony towards nursing.

NOTE: In the above caption, the author lists the weight of “The Lady Parkes” nugget as 1347 oz. However more recent research shows that the correct weight is 1349 oz (Forbes and Parkes Gazette Tuesday October 2, 1894 p3)

While Henry Parkes was a popular man throughout the colony, there was a special affinity with the Shire that would one day bear his name. The following excerpt demonstrates this special relationship:

Sir Henry Parkes visited this town on three occasions. First was on 19 August 1873 when he was enthusiastically greeted by the residents of this fledgeling [sic] mining community, then known simply as The Bushmans. Sir Henry must have made a favourable on the townspeople, as it was decided to rename the town in his honour. From 1 December 1873 The Bushmans became Parkes.

His second visit was for three days in July of 1887, and full details of this excursion were reported in the Sydney Morning Herald of 23 July 1887. Sir Henry was moved by the genuine warmth of the reception he received. Earlier in the year he had been created a Knight Commander of St Michael and St George (KCMG), and he was obviously a popular man throughout the colony. Following a formal welcome in the main street the Premier re-entered his carriage to drive to the Royal Hotel, and the crowd then gave a striking proof of its enthusiasm. In spite of Sir Henry’s repeated protests, they insisted on taking out the horses and drawing the carriage to the hotel themselves. In the evening a number of stores were illuminated with Chinese lanterns, and Sir Henry delivered an open-air address to a large audience from the balcony of the Royal Hotel.

The schedule for the following day included visits to the hospital, public school, Council Chambers, the village of Currajong, and receiving several deputations. In the evening the Premier was entertained at a grand banquet held in Fletcher’s Hall behind the Royal Hotel. About 150 men were present, the chairman being Mayor J A Rose. In attendance were MLAs Messrs Stokes, Kelly (both travelling with the Premier) and local Member H H Cooke. Also present were the Mayors of Molong, Mr Black, and Forbes, Mr Ritchison.

In 1893 Sir Henry made his third and final visit to Parkes. Then aged 78, he was accompanied on this trip by his second wife (Eleanor Dixon) and son Charles Henry, born 15 April 1890. To celebrate the visit the New Bushman’s Mine dedicated the retorted mass of gold to Lady Parkes. Source: Parkes: A Photographic History by Ian Chambers, 1988 Self-published: Parkes, NSW page 45

NOTE: The report above states that Henry Parkes made three visits to Parkes. He in fact made FOUR visits to Parkes and the photograph above is during his fourth and final visit. Thanks to Lex and June Weaver for pointing this out.

Since his epic flight to Europe, via America, some years ago, to his recent triumphal march on Molong and his doubly revered Parkes, he has been the most expert and successful political excursionist in the Australasian colonies. Source: Wagga Wagga Advertiser (July 28, 1887) p. 2. Retrieved December 14, 2015, from trove

The Premier had another enthusiastic reception at a banquet at Parkes on Saturday night. The local hall was crowded and many ticket-holders were unable to gain admission. The company included nearly all the representative men of the district and a large number of ladies. The Premier made a lengthy speech, in the course of which he explained his views at greater length on the topics already touched on at other places….

An unprecedented incident occurred during his visit to Parkes. The Premier was invited to meet 40 ladies at the house of a local resident, and on complying with the invitation he was presented with a most flattering address. The receptions accorded to the Premier throughout the western districts, and especially on the route from Molong and in the town of Parkes, were remarkable for the enthusiasm and unanimity of feeling pervading the people. Source: Sir Henry Parkes’ Trip in the West. Goulburn Evening Penny Post (July 26, 1887) p. 4. Retrieved December 14, 2015, from trove

To celebrate the unique relationship that this Shire shared with the five times Premier, it was decided to redevelop Chamberlain Square and add a 3.2m high bronze statue of Sir Henry. Terrance Plowright, from Lawson in the Blue Mountains was selected to create this lasting memorial. Plowright had made and installed statues of Sir Richie Benaud at the Sydney Cricket Ground, “Surf Lifesaver” at Wollongong Beach to celebrate the centenary of surf lifesaving in Australia, and various statues in Katoomba, Blue Mountains.

A team of Parkes Shire Council workers collaborated with famous sculptor Terrance Plowright to install the statue with only hours to spare before the official opening. However all was ok, Parkes put on a fantastic event and the weather was perfect too. 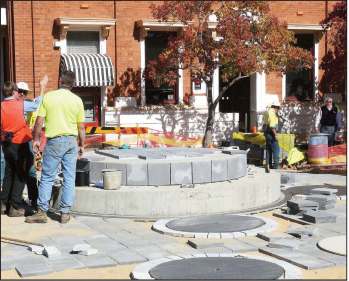 Thursday – only three days from its planned opening and it appears that Chamberlain Square won’t be ready! Source: Parkes Champion Post Friday May 9, 2008 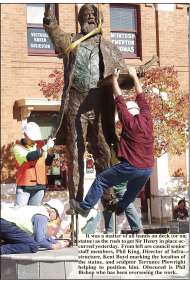 Chamberlain Square is ready and the final touches on the statue are carried out the day before Governor Marie Bashir is due to unveil the bronze memorial. Source: Parkes Champion Post Monday 12, 2008

Everything is almost ready. Clarinda and Welcome Streets have been closed to traffic, just the chairs to be set out. Photograph by Parkes Shire Council May 12th 2008

The Governor reveals the statue! Photograph by Parkes Shire Council May 12th 2008

A different angle of Sir Henry Parkes statue with the newly planted trees. Photograph by Parkes Shire Council May 12th 2008

Some final thoughts on why Sir Henry Parkes is highly regarded, not just amongst the Shire that bears his name, but also across Australia.

That Parkes, without money or connections, responsible for a large family and many failed business ventures could become premier of New South Wales five times is a reminder of the openness of the new social environment that was created here. It was the result of a mixture of necessity and idealism. Ryan, Susan The Crimson Thread: Ideas For Australian Society Sydney: Henry Parkes Foundation, 2015. page 5

…Australians did create a society characterised by an egalitarian ethos, and an effective attention to the needs of individuals and communities through a strong and well resourced public sector. For the mas of people, Australia was the best and fairest country in the world. We can thank Henry Parkes for that.Ryan, Susan The Crimson Thread: Ideas For Australian Society Sydney: Henry Parkes Foundation, 2015. page 8

Modern Australia, often described as ‘the lucky country’, or ‘the happy country’, can attribute, I believe, these valid descriptions to the vision, the energy and the inspirational leadership of Henry Parkes. Many of those characteristics for which Australians are renowned across the world – egalitarianism, the rewards of integrity, access to education, fine health services, and working towards the common good – can find these ideals in an examination of the example and leadership of Henry Parkes. Bashir, Marie The Crimson Thread: Ideas For Australian Society Sydney: Henry Parkes Foundation, 2015. page 175

Henry Parkes features prominently in a host of Federation collectibles, including this teapot and beaker from Powerhouse Museum Collection