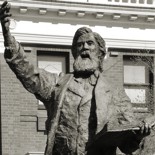 Continuing our series on the stories behind the names of sporting fields and parks within the Parkes Shire, this post looks at a parcel of land that many people have driven or walked passed many times. Mazoudier Park is the second park on the drive in from Orange (the first being Lions Park). The name Mazoudier will be familiar with many residents and there were several prominent members of the Mazoudier family in Parkes. 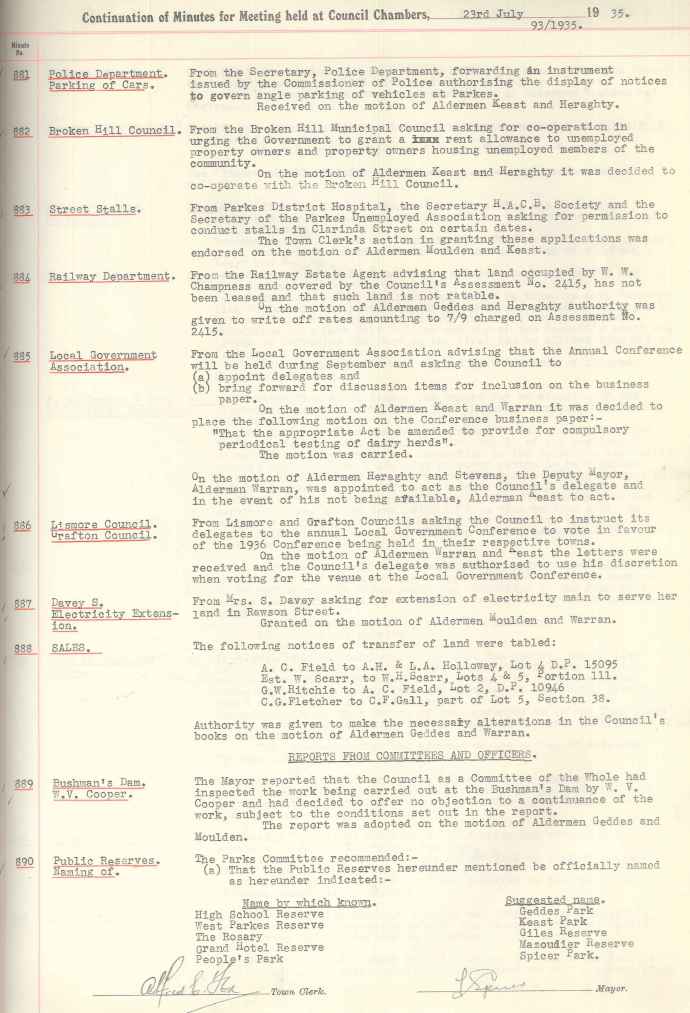 The name Mazoudier is quite well known to long term residents, having been a large shop on the corner of Clarinda Street and Church Street, which to locals was known as Mazoudiers’ Corner even after the store became Bebarfald’s and then later Central West County Council offices (Yvonne Hutton, President of Parkes Historical Society Parkes Champion Post Friday, March 8, 2013 page 7). Descendants of the Mazoudier family have traced their ancestry back to France, where the name Mazoudier (and its variations Mazodier and Mazaudier) were relatively frequent in the south east of France. According to research undertaken by the family, the meaning of the name is “owner of the house”. The very earliest mention of the Mazoudier family is a marriage between Catherine Mazoudier and Jacques Merle on 13th April 1640 in Malons-et-Elze in the Ardeche/Languedoc region of southern France. Catherine was the daughter of Simon and Gabrielle Mazoudier, however the family have been unable to determine whether this family is directly linked to the Mazoudiers who came to Parkes. 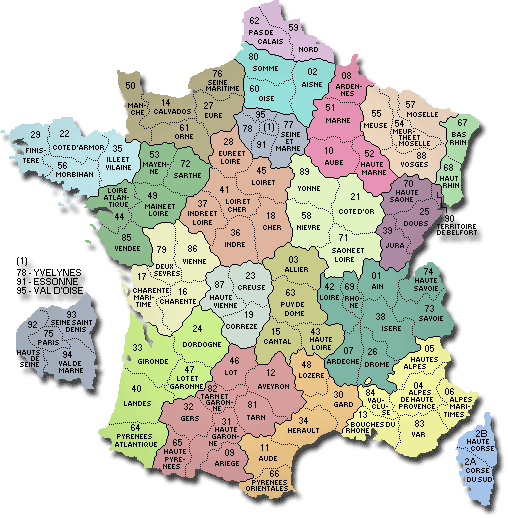 Map of France highlighting the different regions. The Mazoudiers were from southern France (07 Ardech and 38 Isere in dark green and 05 Hautes Alpes in yellow) Source: Map-France.com

The first Mazoudier to arrive in Parkes was Frederick Amable Mazoudier, who was born 5th January 1825 in Gap, Hautes-Alpes, Provence-Alpes-Cote d’Azur, France and died in Parkes on 17th July 1906 (Source: www.ancestry.com). According to his obituary he arrived in Parkes via the goldfields of Victoria in 1874 and was popular with all he came in contact with. Amable’s sons were Loftus, Fred and Walter Mazoudier. Fred was a good sportsman, charitable and popular as well. Sadly he died from a paralytic stroke aged 51 in Prince Alfred Hospital, Sydney (Source: The Western Champion Thursday September 7, 1916 page 19)

Loftus Edward Mazoudier and his wife Adelaide Mary Mazoudier (nee Weily) had two sons Claude and Keith George. Due to his elder brother, who was three years old at the time, being unable to say ‘brother’, Keith George became to be known as “Budge” – a nickname that stayed with him for the duration of his life. Keith George Mazoudier was a grazier, and continued in the family tradition of being a good sportsman. When Keith’s father passed away in 1935, Keith ran for Council. He became an Alderman in 1937 and served on the Council for four years. 1939 was an eventful year for “Budge” as in February 9th he married Joan Drew of Manly, at St Philips Church, Sydney. On December 14 he became Mayor of Parkes – just three months after World War 2 had commenced. At the age of  31 years and 11 months he is the youngest Mayor of Parkes.

During his time as Mayor, Keith Mazoudier oversaw: 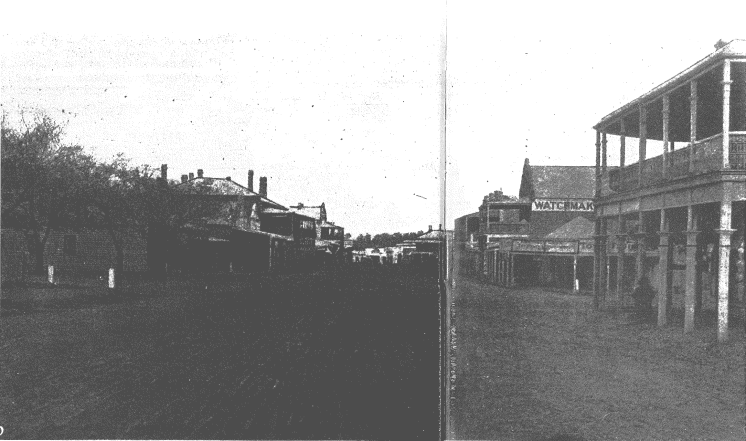 The main street as the photographer for the Town & Country Journal found it in 1898. The vantage point is just north of the intersection of Church Street, with Mazoudier’s building on the right, and across Church Street on the corner is Howell’s store. Source of photograph and text: Parkes: A Photographic History by Ian Chambers 1988 Self-published: Parkes, NSW page 46-47

When K G Mazoudier was narrowly defeated in the Council elections in 1941, he went back to grazing and in 1942 joined the Australian Army. His brother Claude was also enlisted, being invalidated home after suffering wounds in Middle East. Sadly Claude died from a car accident in 1951. In World War 1 there were two Mazoudiers enrolled – Frederick Mazoudier and Reginald Godfrey Thomas Mazoudier. Reginald was the son of George Eugene Mazoudier, whose father was Frederick Amable Mazoudier, the first Mazoudier in Parkes. George Eugene moved away from Parkes and brought his family up in Cobar (and it is these descendants who assisted Heather Unger in supplying us with this information) 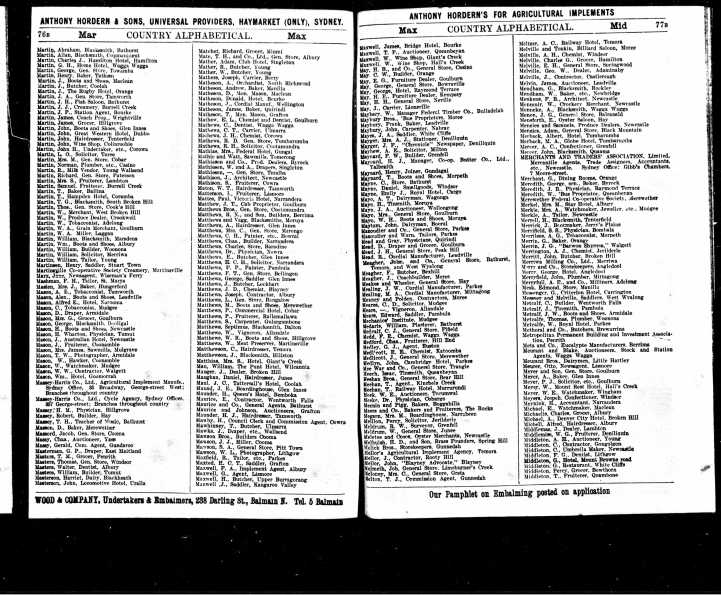 Copy of Sands Directories: Sydney and New South Wales, Australia 1858-1933 page 76B accessed on www.ancestry.com which shows two businesses bearing the name Mazoudier in Parkes in 1903

One man came to the Parkes Shire, and from his family came many bearing his name who lived and made a positive impact in the Parkes Shire. It is fitting that there is a permanent reminder of a family who worked tirelessly yet were known for their benevolence and congeniality. Mazoudier Park is a reminder of how just one family’s hardworking and friendly, generous nature helps to make a positive and lasting impact on their local community. 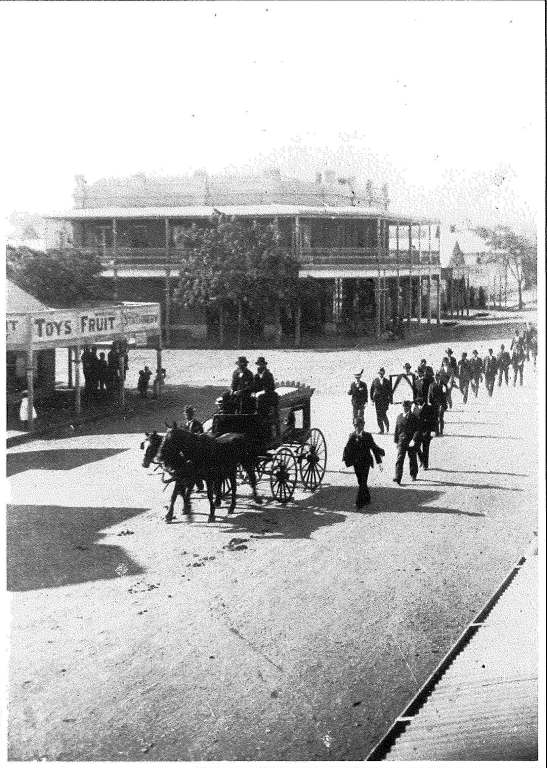 The well-appointed horse-drawn hearse carries the coffin of local bootmaker H Currey down the main street, followed by members of his lodge ahead of the other mourners. This scene also includes a fine view of Mazoudier’s building – later Bebarfalds, and also of the site of the CWCC headquarters – on the corner of Church Street. Early 1900s. Source of photograph and text: Parkes: A Photographic History by Ian Chambers, 1988 Self-published: Parkes, NSW page 74

It’s clear to see in this photograph the extent of the commercial area of the town in the early years of the 20th Century. The farthest two-storey building is Mazoudier’s (later Bebarfalds and then the site of the CWCC). Harry Blamey operated the Club House Hotel, and this photo was taken after the wooden corner hotel was burnt down and the block cleared prior to construction of the new Club House in 1908. An E. Bullock postcard. Source of photograph and text: Parkes: A Photographic History by Ian Chambers, 1988 Self-published: Parkes, NSW page 96 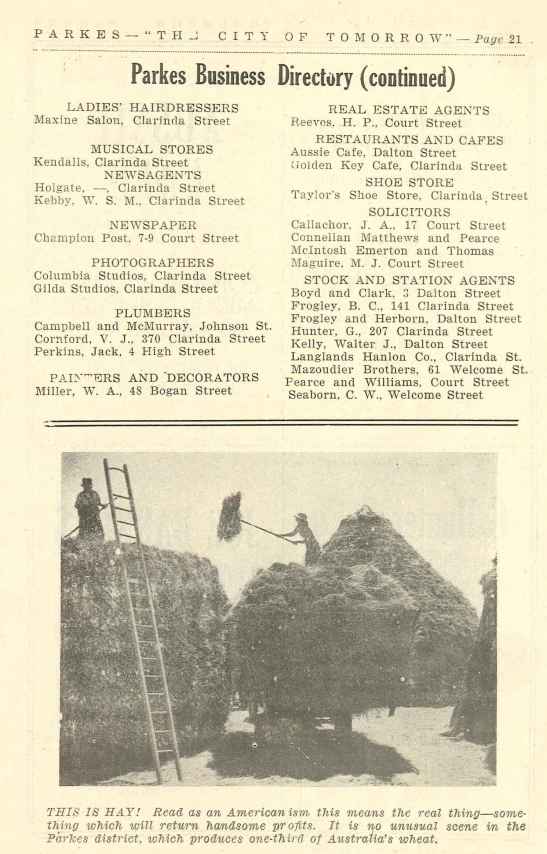 The Mazoudier Brothers are listed as Stock and Station Agents in the progessively named promotional booklet The City of Tomorrow in the district of to-day [sic]. Published by Cyril A. Kelly and John Sweeney in April, 1946. Page 23. This booklet is available for browsing in Parkes Shire Library’s Local and Family History room. 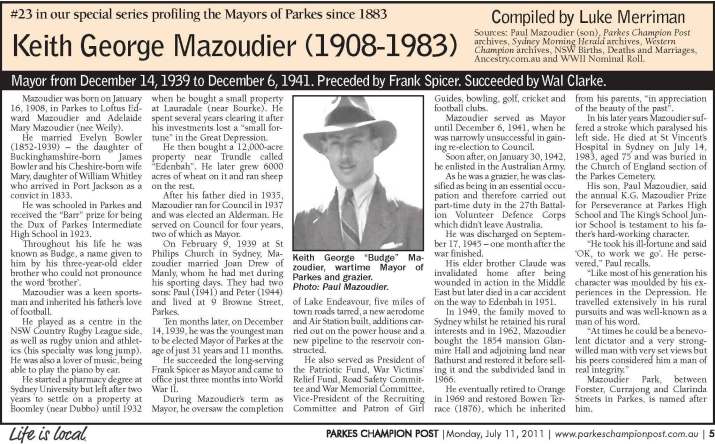 Former editor of Parkes Champion Post, Luke Merriman, compiled reports on the former mayors of Parkes. This is the one on Keith George Mazoudier. It is this article that states Mazoudier Park is named after him. Note that his exploits before taking the Mayoral office must have been worthy of naming a park after him as he became Mayor fours years after Grand Hotel Reserve was renamed Mazoudier Reserve. Source: Parkes Champion Post Monday July 11, 2011 page 5