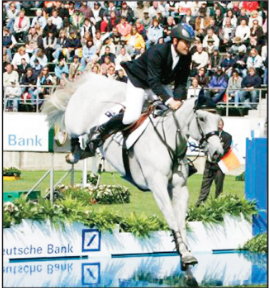 Peter McMahon was born October 16, 1981 and grew up on a farm near Tullamore. McMahon began riding horses at the age of five. Peter and his brothers – Ashley, Craig, Steve and Ross – grew up heavily involved in the annual Tullamore Show. Parents Robyn and Kevin remember Peter taking to horse riding with great enthusiasm at an early age. Peter learned his trade on the local show circuit.

Peter moved away to Queensland, marrying his wife and coach, Michelle Lang-McMahon. It was a Father’s Day present that would lead to his eventual Olympic selection. Michelle gave him the $25,000 horse Kolora Stud Genoa in 2004 to celebrate Peter’s first year as father to daughter Maleah. At the age of 26, Peter was chosen to go to 2008 Beijing Olympic Games. Before turning to professional showjumping, Peter was a diesel mechanic and is also a highly experienced farrier and skilled horse-trainer and pre-trainer (Source: Lang-McMahon 2011)

Parkes Champion Post describes his early talent and selection for the Australian team for Beijing:

Peter showed his talents at an early age, winning the Australian Young Rider Championship and Australian Junior Championships… McMahon gained selection after competing in the Australian Final Olympic Selection Event in Aachen, Germany. Riding KS Genoa, McMahon’s team finished in the top three, placing him in prime position to be in the Olympic squad that will be officially confirmed soon.

Peter’s story highlights the fine line between success and disappointment in sport. With the team poised in a good position for a medal placing, his horse, KS Genoa needed reshoeing. Once this was completed, Peter and KS Genoa were to do some practice jumps before taking part in Round 3 of the team event. Unfortunately the mare stumbled, throwing Peter to the ground and injuring him. McMahon suffered a broken left collarbone and was forced to withdraw from competition. Olympic team jumping takes the best three results from a team of four and this meant that Australia’s remaining jumpers had no margin for error. Australia finished ninth and Peter McMahon had to be taken to hospital. Source: Broken collarbone ends Peter’s Olympic campaign. (2008, August 22). Parkes Champion Post, p. 3. 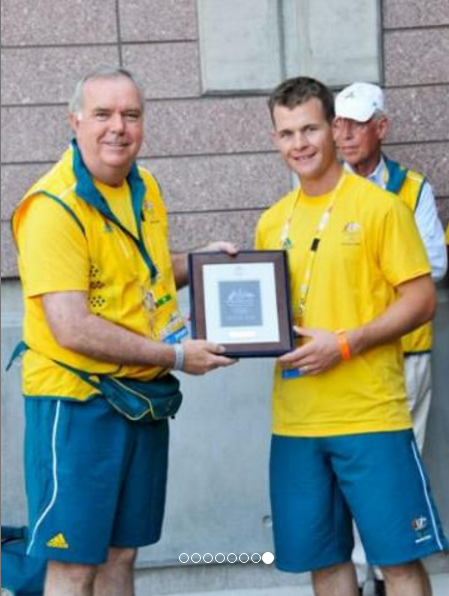 While Peter’s Olympic dream ended in a disappointing fashion, he was not finished with equestrian. By the end of 2009 Peter and KS Genoa were:

SaddlerySales.com Sport Star of the Year was Peter McMahon. Peter McMahon took out the coveted Olympic Cup at the prestigious New Zealand Horse of the Year, where 25 of the best combinations from both sides of the Tasman did their best in front of thousands to conquer the Leopoldo Palacious course, where the prize money was $150,000. In addition to this fantastic win, Peter was the only Queenslander in the 2009 Elite Jumping Squad and Peter came 1st at the Grand Prix event at the Stanthorpe Show in January 2009 Source: Horse Deals Gallery. (2009, December 2). Retrieved July 15, 2016, from http://www.horsedeals.com.au/index.php?p=event&e=9280-Equestrian-Sports-on-the-winning-podium

Peter is still involved with horses and recently he and wife Michelle Lang were part of the organising committee who coordinated the Aquis Showjumping Classic at Elysian Fields, Canungra. Source:

If you have stories or memories that you are willing to share about Peter McMahon or any of the other Olympians of the Parkes Shire , please contact Parkes Shire Library via library@parkes.nsw.gov.au so that they can be shared and kept for posterity on this blog. Alternatively you may leave comments on this page.

REFERENCE LIST (in order of appearance in the above article)